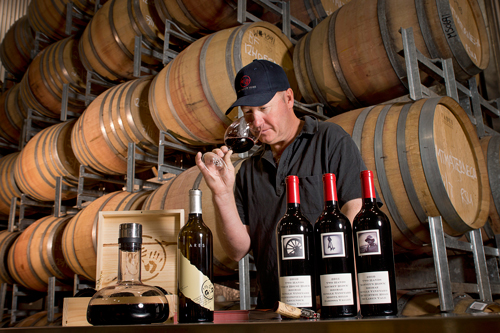 The 'two hands' are Richard Mintz and Michael Twelftree who formed the company in 1999 with the clear objective of making the best possible shiraz based wines from prized shiraz producing regions within Australia.

In 2000 they started with just 17 tonnes of fruit from the McLaren Vale and Padthaway wine regions. From the beginning the wines were very well received at home and abroad with a healthy stream of reviews, culminating in 2004 with Robert M. Parker pronouncing Two Hands as "the finest negociant operation south of the equator".

The heart of the operation is based in the Barossa Valley; the cellar door and winery are located in the sub district of Marananga. Since the winery opened, Two Hands success has gone from strength to strength with numerous accolades defining the culture of the organisation. Two Hands continues to extend its distribution around the world, branching out from the Australian domestic and United States of America markets to now include the export markets of the United Kingdom, Asia, Canada, New Zealand and the European Union.

Welcome to an exciting new B2B marketplace!
We have just launched and are currently onboarding new vendors.
Would you like to register your interest?